April 2015, the Java Jivers were formed as a house band for the Common Grounds Coffee & Music House in Bunn, NC. Three of the musicians in the group were co-owners of the coffee house as well as seasoned musicians; Peggy Harris, Buck Harris and Tiger Faircloth. Peggy & Tiger have been fellow musicians and played together for years; while Peggy & Buck Harris had been musical partners for nearly 30 years. Upon the passing of Buck Harris in August 2016 and the closing of the coffee house, the Java Jivers live on thru Tiger and Peggy with a passion for music and love of people. Tiger’s amazing talent with the stand up bass (Dusty) give the group it’s thunder. Peggy’s wide vocal style and rhythm guitar bring up the front. In 2018 Java Jivers  added a third member, Tokyo Rosenthal, a popular singer/author in the Triangle.

“Rosenthal can draw you into his lyrics much the same way that James Taylor and Don Henley can”. “Take Jackson Browne’s personal confessions and wrap them in Kris Kristofferson’s world weary tales of broken relationships and you have an idea of what to expect from Tokyo Rosenthal.” “This is Americana with real teeth in the lyrics”. This and more is what the critics are saying about Tokyo Rosenthal. Tokyo has opened for America, Stephen Still and other recording stars plus toured the US, Canada, Europe, Japan, Scotland, Netherlands , etc. To save room listing his accomplishments, please go to tokyorosenthal.com and see for yourself. The Java Jivers are a musical variety show filled with humor, fun and a richness in soulful melody. Performing traditional songs from the 1920’s and spanning across the years to modern day contemporary soft rock, country, folk, blues, gospel, bluegrass and jazz….the Java Jivers are filled with surprises and warmth, choosing songs they love and the audience loves back. Their performances often include many wonderful local popular guest performers who enrich their events. You never know what will happen at a Java Jivers’ concert. Join us for an awesome occasion in music and fun! 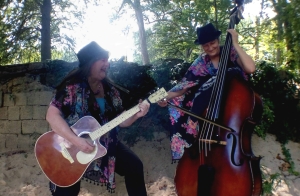