Singer, songwriter, award-winning master performer- David Russell has weathered the changing winds of acoustic string music with his distinctive originals and those of his songwriter friends.
Born to a musical family, David began classical guitar at 8, later honing his skills in blues, jazz, folk-rock and country music. A turning point came in what he describes as “a not entirely misspent youth” at the Old Time Picking Parlor in Nashville, when he heard Norman Blake with the Tut-dubbed “Dobrolic Plectral Society” (the future Aereoplain Band) with Tut Taylor, John Hartford & Vassar Clements… and a short while later, Bill Monroe with Norman. David’s writing, playing and musical compass have been influenced by and is shaping a new/old music sorely needed in an increasingly rootless world. Timeless traditionals & classics mixed with contemporary writers take an audience on a musical tour with an energy and sensitivity that captivates. David says by connecting his playing and singing to live audiences: “ I want to leave people entertained, inspired and uplifted, with memories that stay in daily life– for me, it’s a matter of deep belief in and dedication to the workmanship of my craft”.
davidrussellandcedarblue.com 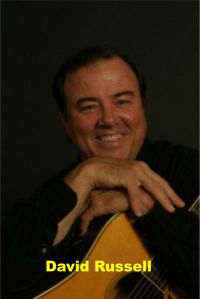