LITTLE WINDOWS (Mark Weems and Julee Glaub Weems) creates a mix of Appalachian and Irish music, and traditionally-based originals, with a special focus placed on unaccompanied ballads. They also explore the spiriitual nature of song and harmonic sound. They tour together nationally and abroad with a focus on the art of the pure voice with tight harmonies in traditional songs. Instrumentation includes guitar, fiddle, banjo, flute, piano and bodhrán. In addition to performing concerts, they also teach workshops and music camps around the country and have developed their own traditional singing camp called Camp Little Windows. Mark has been steeped in the Old Time Tradition for years while Julee has done the same in the Traditional Irish realm. Together they bring a beautiful blend of both traditions with a unique harmonic sound that is rare and often beckons the response from audience members, “I’ve never heard anything like it!” or that “there is a kind of lovely magic that weaves in and out of their music and settles into the audience whenever they perform.” Though they have both made several recordings with other bands as well as solo projects, Julee and Mark’s first recording together, Just Beyond Me, was submitted for a Grammy and has been highlighted on NPR’s radio program The Thistle and Shamrock. Please go to their web site for much more information on these accomplished performers.
www.littlewindows.net 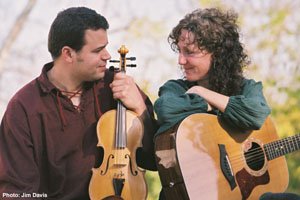